Is editing your images cheating?

If you are a member of any online forums or Facebook groups, I’m pretty sure you have heard someone say,  “I like to get my settings exactly right so I don’t have to edit”. Well, I say good for them, if they are satisfied with their results then that is great. But for the other 99.99% of us, that isn’t the story.

There are three types of photographers

The first type of photographer is a person that takes photos of a sunset or their kids and uploads them to their computer. They will pick some out to get printed, but that’s it. They don’t want to spend time editing them or even learning how to do a basic edit.

There is absolutely nothing wrong with this. If you’re having fun taking photos, that’s all that matters.

Second are photographers that like to put their stamp on their work. Even if the only thing you do is straighten up the image and try to correct the exposure. They know how to do a few things in Lightroom or Photoshop and it makes a huge difference to the final image.

Once a photographer has started to edit their images they are also starting to experiment with camera settings. Camera settings and editing techniques tend to go hand-in-hand.

The third group is the photographers that act like or are professional photographers. They know that to sell their work it needs to be top-notch. Editing to this group of photographers is half of what’s needed to produce a quality image. Getting the settings exactly right in the camera is only 50% of the job. 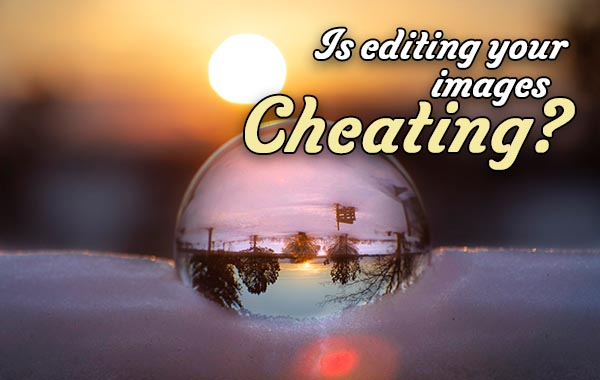 But they didn’t do editing 100 years ago!

Yes, they did. I want to introduce to you Mr. Ansel Adams, an American photographer. You’ve probably heard of him and know his work. For those of you that haven’t heard of him, let me give you a quick rundown.

He was born in 1902 and got his first camera when he was 12. In his early 20’s he was commissioned to take photos of the National Parks. By 1925 he had developed a technique that relied on sharp focus, heightened contrast, precise exposure, and darkroom craftsmanship.

Darkroom craftsmanship means he use everything he could to produce the tonal detail he needed. He was in control of how his prints looked using methods such as dodging and burning.

Ansel Adams photographs sell for many thousands of dollars. His images are stunning, and when you consider the equipment he used, and that he was climbing mountains to capture them. If he had climbed the mountains, taken a few pics, and then just let anyone develop the work he wouldn’t be remembered for anything special. It’s the fact he stressed over how his photos were developed and how the images looked, that made his work so memorable.

So what should you do?

Well, I’m not saying you should start climbing mountains to improve your work. I am going to tell you to start thinking of photo-editing as 50% of the process. It really doesn’t take much editing to make an image pop.

What will make photo editing easier?

Without a doubt, the number one thing you need to do to make the process easier is to stop shooting JPGs. You need to shoot in RAW. The RAW file has layers of information that are lost when the camera saves the image as a JPG. Shoot in RAW and all the information is still there.

When an image is under-exposed and saved as a JPG it’s almost impossible to fix it. If it is shot in RAW you can correct whatever you like to the image and then save it as a JPG.

All you do is shoot in RAW. In Lightroom, you import the RAW files, edit them, then export the files as JPGs. You can always go back to the original RAW files at a later date and re-edit them.

So is editing cheating?

No, it definitely is not cheating. It is just half of the job of a photographer.